Joshua Hendy started California's first redwood lumber mill shortly after sailing around Cape Horn to San Francisco Bay in 1849. In 1856, he founded the Iron Works to supply Gold Rush miners with equipment and soon became a leader in the industry. His plant produced mine cars, buckets, stamp mills, ore crushers, and the hydraulic "giants" used to dig the Panama Canal.

Early in 2005, city officials recognized a need to replace these old poles from San Francisco’s historic past. Over the past 88 years, these poles have with stood accidents, been backed into by delivery trucks and have held up unbelievably well. Since the original Iron Works closed down in the 1940’s, the original tooling needed to recreate this pole was lost or destroyed. The Niland Company was asked to take on the monumental task of duplicating the highly ornate all cast iron pole that had not been cast in over 80 years. Our first task was to receive an old original sample from the city so we could accurately recreate the master carving required to cast this pole in iron. Several layers of paint were removed to reveal the raw casting. Reproduction plastics were used to pull detailed sections out of the more intricately detailed areas; however most of the pole was so large that we simply had to carve sections by hand. The complexity of design these early master carvers achieved in their tooling was unbelievable. Reproduction plastics could only be used on 30 percent of the completed poles tooling. The rest was carved in hard wood by hand. Over 3,800 man-hours later, our tooling was completed. Patterns had to be fabricated of not only the poles detailed outside, but also the inner dimensions of the poles which were transferred into the many center core boxes needed to cast these sections into one unitized piece.

Once the tooling was finally completed, we quickly realized that the hard part was about to begin. The original wall structure of this pole was over 1.5 inches thick. Giant casting flasks had to then be fabricated that would not only support the weight of the cast iron pour but also the multi-tons of sand needed for the process itself. Molten iron flows much like water when it is poured, its viscosity increases as it is cooled and finally solidifies over several minutes. Cooling down this part would take 16 hours. Our first pouring of the 1200 pound pole section was a complete failure. As the molten iron was poured, intense pressure began to build inside the molded cavity. The wall thickness combined with the weight of the molten iron was too much for our first flask to support. We also only had two fill ports in the mold which added again to the pressure, nearing completion of the 900-pound pour, disaster struck as molten iron burst out of the side of the sand flasked walls. Twelve hundred pounds of raw molten iron burst out the sides of our first mold; there was absolutely nothing we could do to quickly salvage it. Most of our flasks were designed to accommodate a wall thickness of cast metal up to about a half inch. We could have save money by duplicating this pole with a half inch wall and poured in the stronger ductile iron. The historical significance of this pole forced us back to the original 1.5 inch wall cast in grey iron. We had to step back and examine the original casting. Clues were again revealed as to how the old iron mongers from Hendy pulled this casting off. 100 years ago during the industrial revolution nearly every piece of heavy machinery imaginable was cast in iron. Closer inspection of the raw casting revealed five fill ports, not the traditional two used today for larger, thin-walled castings. Next we increased the size and capacity of the sand flask and added internal sand supports to keep the pour from literally “bursting at the seams.”

Success was ultimately achieved on our fourth attempt. After each pour we learned how the old foundry men of the past achieved such incredibly large and intricate pours. Nothing like this pole has been cast on this grand a scale since then... until now.

Today, San Francisco contains many Hendy built monuments, such as the Roman arches and lamp posts which still illuminate the Golden Triangle District and Chinatown, and the machinery which operates the famous 3rd Street Bridge. Each monument that still stands pays tribute to the Hendy legacy in California, a legacy which the Niland Company is now proud to be a part of. 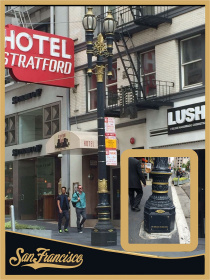